Beyond the Gates of Antares

Battle for Xilos – The First Week

The first week of the Antares online campaign has been frantic, furious, and action-packed… with the fighting focused around the Landing Zones, and all factions rushing to establish a tentative foothold upon the builder planet, firefights and running battles broke-out across huge areas – and they continue to rage! 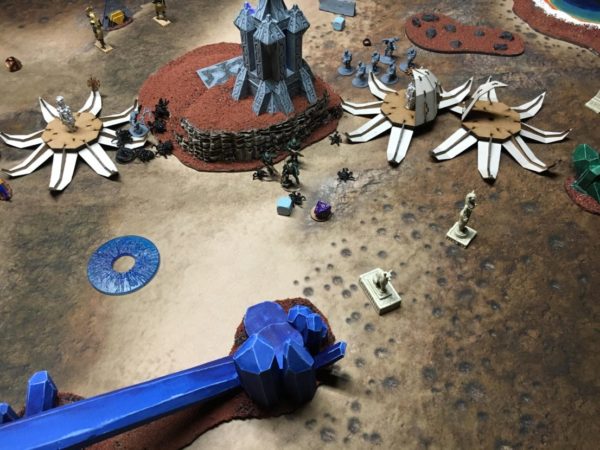 The Algoryn took disastrous losses on descent to the planet’s surface. Seven out of twelve units were lost, and one landed off the board. Touchdown, on the other hand was devastating to the Boromite defenders. Three of the four units on the board were forced from their positions and forced down by the incoming pods.

It looked like the game was over after turn one. The Algoryn got all 13 troopers in contact with the generator, dealing 13 points of damage. The only Boromite unit able to respond to the initial assault was the micromite probe shard.

Turn two saw the Boromites respond with a vengeance. The gang fighters and work gangs softened up the Algoryn troops, allowing the rock brood to rush in and totally eliminate one of the AI squads in an assault. Arran Gestalin charged in from the flank, and damaged the Algoryn command squad. The weakened Algoryn units were able to score an additional six points of damage to the generator. They just needed one unit to survive the next turn, to finish the job.

Alas, it was not to be. The work gang and lavamites were able to eliminate the remaining attackers, leaving the generator tower intact!

The landing zones to the East saw the thrusting spearhead of Algoryn task force Rising Star making planetfall in huge numbers – their Drop Capsules screaming through the atmosphere, transporting squads of A.I Infantry and support weapons down to the surface – relieving the Concord expedition, and coming face-to-face with the Ghar in some of the initial firefights.

With a strong but uncertain foothold, the Algoryn now thrust outward from the Landing Zones in order to repel the Ghar defenders, pushing them further back into the Xilos jungle… 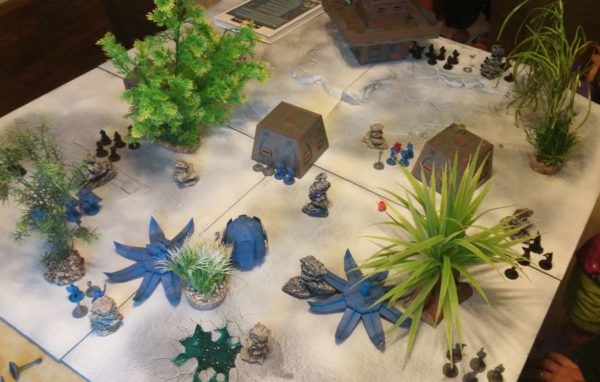 In the first turn, the Algoryn drop capsules made landing, putting down an AI Infantry Squad, two weapons teams, a command squad, and an assault squad. The Freeborn mag support and infantry put a withering hail of fire on the Algoryn but no troopers fell.

Turn two was much bloodier than the first, with reserves coming on for both forces. The Algoryn Assault Team moved forward and the Freeborn infantry got to learn all about D-Spinners before they were destroyed. On the Algoryn left flank the Freeborn infantry and sky raiders moved forward, putting down a few of the AI infantry and pinning them. The Algoryn command squad sprinted to the Generator, capturing it and letting the other squads know that they could focus on killing Freeborn.

The Freeborn commander was cunning, bringing his own retinue on from a flank where they could immediately soak the Algoryn support team with plasma, removing them from the field. The Algoryn commander tasked his Infiltrator team with taking down the commander, then sent a squad of his own Algoryn Intruder Squad upfield to fight back vs the Freeborn jetbikes.

Turn three was the decisive turn. The Freeborn reinforcements and support guns rolled hot on their dice and managed to rout the assault squad and AI Infantry. The Freeborn jetbikes pushed back toward the generator and recaptured it. They also removed the Algoryn commander from the board, causing the Algoryn’s morale to break. The generator would stay in the Ghar’s hands for today… 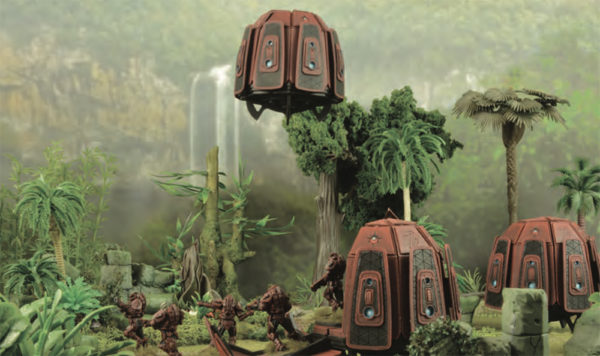 However, it is the forces of the Concord who have established the greatest standing in the first week’s fighting – having successfully navigated the perils of the Ghar blockade, and the arrays of enemy defence systems, and are now the force which is seen in most numbers across Xilos – having landed all across the landmass of Xilos – including a number of risky Drops undertaken amidst the dense fauna of the gullies and ridges of some of the most impassable terrain, in order to drive-out the Ghar forces. 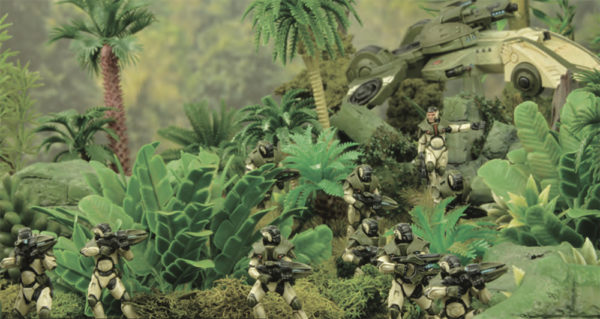 This initial surge of Concord activity and successes is no sure sign, though… Ghar reinforcements have been sighted amassing at several key locations across Xilos – and you can bet that those visible are only the tip of the iceberg – there are sure to be thousands upon thousands more crawling amid the vast, sprawling tunnel network which lies beneath the surface… and who knows what other dangers await them as they further explore the planet… user TWSJosh intercepted a report of one such encounter… 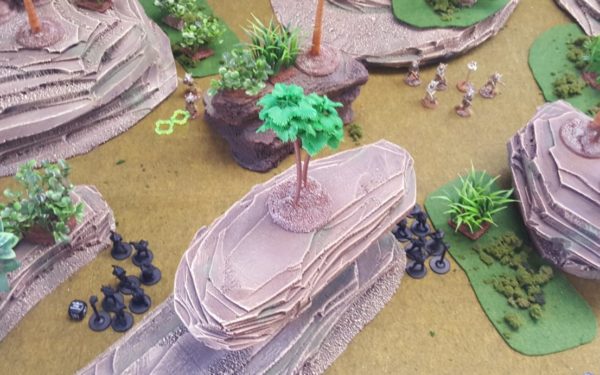 The Isori Sentax reports indicate a heavy Concord presence in the canyon area of western Xilos, this cannot be tolerated.

A scout force of Isorian phase troopers were sent to eradicate the Concord in this area. As soon as the Concord showed their location they came under heavy plasma carbine and plasma lance fire. The strike value 2 weapons tore holes in the concord hl armor. The Isorian command squad was able to shoot down the light plasma support drone and its drone squad in one turn. It left the concord strike teams heavily outgunned.

The strike teams attempted to use the cover of dense forest terrain of Xilos but it wasn’t enough. The Isorians pressed the attack and cleared the battlefield of the concord enemy. The Isorian high command will be pleased to hear this report. The concord command however will not be pleased and it can be assured revenge will be coming!

Scores on the doors

The initial week’s points standings break down as follows;

However – today sees the launch of the Second Episode of the campaign, which sees a new scenario unlocked – giving all players a new challenge as the forces push-out from the Landing Zones to further explore there Xilos jungles, and attempt to unlock the secrets of the builder planet.

As forces push-out from the Landing Zones, reinforcements continue to pour-in! – the Episode One mission is still available to play throughout the rest of the campaign… with inbound fleets coming from all corners of the Determinate in order to resupply and reinforce those on the ground. Keep playing the ‘Landing Zones’ scenario throughout the campaign to further affect the outcome, and either bolster the Concord lead, or turn the tide in favour of whichever faction you represent…

As forces advance from the Landing Grounds, urgent support is required! – all sides need reinforcement and resupply – so be sure to sign-up to the campaign and show your colours now!

If you’ve already signed-up and have taken-up the cause – why not share the link around to your gaming buddies and other friends in order to rally support!

Don’t forget that there’s loot on offer – each week we’re picking a bunch of winners to receive all sorts of exclusive Antares-related prizes.. take a look here for details!

About The Campaign & Game

Run a Global Campaign for Your Game - Click Here

Beyond the Gates of Antares & Campaign Docs.
©2016 Warlord Games. All rights reserved.